In the late afternoon, I arrived at the Sisters of Saint Francis of Perpetual Adoration convent. I parked my car in an empty parking lot, unsure I had parked in the right place. Snowflakes began to fall so I quickly locked the car and looked around until my eyes settled on a sister walking from one building to the next. I approached her and she graciously agreed to show me to where I was to go. A few months prior, I had emailed the convent, asking if I could spend a day with a sister and document it for a photography collection that I wanted to begin. Much to my surprise, they happily agreed and we set the date. I had been looking forward to this day for weeks. We stopped at the main office and I was left there to wait for Sister Lisetta.

Sister Lisetta arrived quickly and she showed me to my guest room. The room was quaint, but beautiful. There was a twin bed, a night stand with a lamp and clock on it, a desk with another lamp and some tissues on it, and a chair near the door. The best part of the room is the San Damiano cross hanging on the wall.

Sister then showed me the main chapel, which is gorgeous, and we spoke outside while we waited for holy hour to begin. It was her responsibility to place the host in the monstrance that day, so when we entered, she headed toward the tabernacle and I knelt and snapped a few pictures. It was also her responsibility to play the organ, so I followed her as she came back and we went to the choir loft together. Everyone prayed in silence before the Blessed Sacrament and there were a few moments I thought my heart might explode from joy. I can hardly put into words how it felt to be praying in adoration, adoring our Lord, alongside so many women who are close to God in a way I can only imagine and in a way that I strive for. After silent prayer, they prayed the liturgy of the hours and a rosary. I took some pictures, listened to the beauty of it all, and knelt there overjoyed.

After prayer, everyone went to dinner. During the announcements halfway through dinner, Sister Lisetta directed the attention to me and explained why I was there and told everyone to “act naturally” if they were to see me pointing my camera at them. When we were finished eating, Sister Lisetta got up to do the dishes with one of the novices named Rachel. While most people might grumble about doing chores, especially dishes, Sister Lisetta and Rachel did not complain; in fact, they were smiling and laughing the whole time. We talked about the Given Forum (Catholic leadership conference for women) that I had attended as well as each of their vocation journeys. Sister Lisetta first heard the call in 6th grade, but moved on from it until graduate school during a difficult time. Lisetta was her middle name given to her at birth; it was also her grandmother’s name. She shared with me that she was originally from Missouri and she has now been a sister for 12 years. 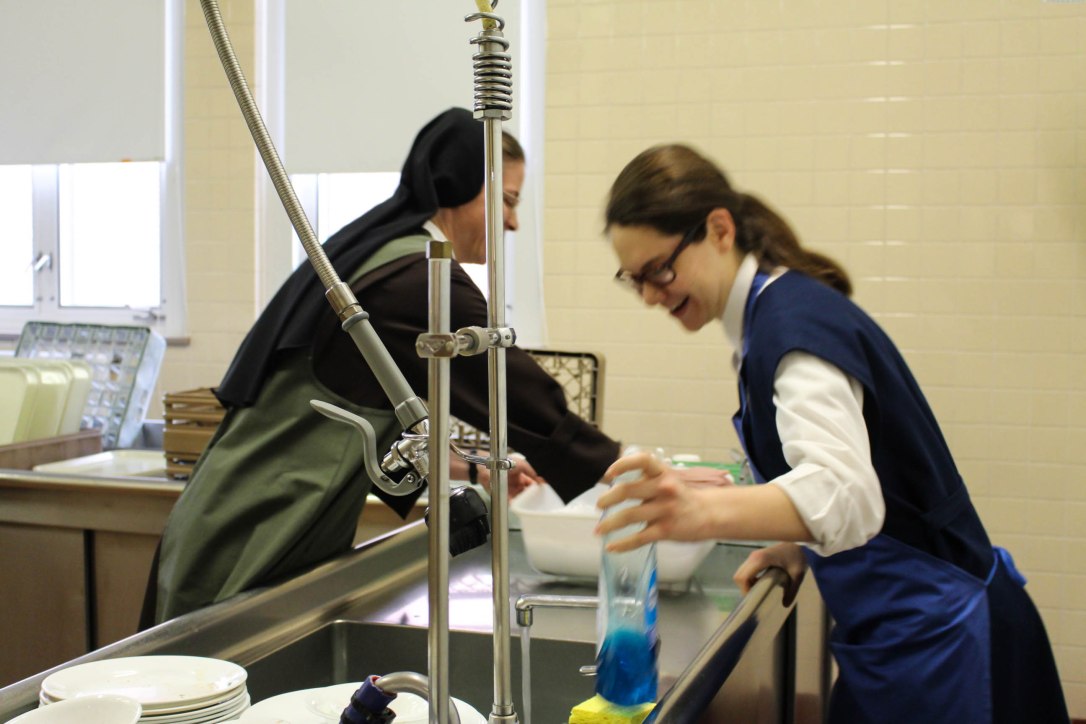 When we finished dishes, the sisters had an hour for recreation. Sister Lisetta, Sister Mercy, and Rachel played Bananagrams and I joined in for the second round. The whole room was filled with laughter as all the sisters played games and enjoyed each other’s company. Night prayer followed recreation hour; it was beautiful. There is so much reverence! Then, since Rachel had made fasting bread (it was Lent at the time), the novices and a few others had a tasting party. It was amazing how much joy these women got from a small piece of bread or from the fact that they had a little bit of honey butter left to use.

Sister Lisetta and I said goodnight and I walked to the guest room for the night.

I woke up at 4:14am and sighed as I realized I must have slept through my 1:15am alarm. The Sisters of St. Francis of Perpetual Adoration always must have one sister adoring Christ, even in the middle of the night, but they prefer to have two. Sister Lisetta had volunteered to take the 1:30am time slot and had invited me to join. Having already slept through one alarm, I was afraid of over-sleeping past the 5:15 wake up call, so I just got up and got ready.

It’s incredible how much things change based on who you’re surrounded by. I’d only brought one outfit anyway (a long skirt with a sweater), but still, even if I’d had other options, there was no one there to impress with fancy fashion or style. It didn’t even cross my mind. The women here are simple in their dress (traditional habits) and are the picture of modesty. Their modesty made me want to be more modest. Perhaps, each day everyone should approach their morning as if they were getting ready to spend the day with the sisters—simple, modest dress, no make-up (or minimal make-up), and up early to pray.

I met Sister Lisetta in the rotunda by the chapel at 5:15am and we walked to the cafeteria to get coffee. We sat by a small lamp table with two chairs on either side and drank our coffee in the dim light. I couldn’t help but think to myself how lucky I was to be sitting there, up at 5:15am drinking coffee with a bride of Christ- a beautiful moment I will treasure!

I asked her if the schedule was difficult to get used to and she said some nights and mornings are easier than others. I also asked her (which likely seemed like a silly, worldly question) what sisters wear to bed and she said they wear simple pajamas, but also have brown robes to wear when they have adoration responsibilities at night. Then I asked what the hardest thing to give up was when she entered the convent. She was quiet for a moment and then said “family.” She explained that while you don’t actually give up your family, you no longer get to be there for all the parties, holidays, or big moments. The sisters get two weeks off for home visits and her family visits her at the convent twice per year. She shared a few things about her family; it is evident how much she loves them and feels a certain closeness to them because of her prayers and the slowness of communication.

Sister mentioned that her choosing religious life was not a declaration of sorts that marriage was bad and virginity was good, but rather that she was giving up something good (marriage) for something better. By 5:45am we were in the chapel for quiet meditation and morning prayer began 15 minutes later.

It was Sr. Lisetta’s turn to cantor. She stood in the pew with the microphone and led the prayer. The sound of the sisters chanting the liturgy of the hours is exactly what I imagine heaven sounds like. It is the epitome of what music should be. It is true that everything that is good is only good because of God. The music was beautiful, if for no other reason than because their sole motivation is to praise God. After morning prayer ended, mass began. I can’t even find words to describe it. Heaven most definitely touched earth that day and I write that with absolute certainty.

Right after mass, the group of novices along with Sr. Lisetta and a few others went to the adoration chapel and prayed the rosary. These women are incredible in their prayer life. It wasn’t even 8am and we had done so much!

Sister Lisetta had breakfast with a group of novices in a separate dining hall. For Lent, as a group they were doing silent breakfast except for reading an excerpt from JPII’s writing on the dignity of women. When the sisters are finished eating, they stand, push in their chairs, make the sign of the cross, silently pray, make the sign of the cross again, and then leave with their tray in silence. Later, I asked Sr. Lisetta what they pray and she said it is a prayer of thanksgiving; how beautiful is that!

During the day, Sister Lisetta practiced playing the organ. She had taken a few piano lessons in her childhood, but mostly learned after she entered. She chose songs to play for the day and practiced them. She’s so talented, even though she told me that she often gets nervous playing. 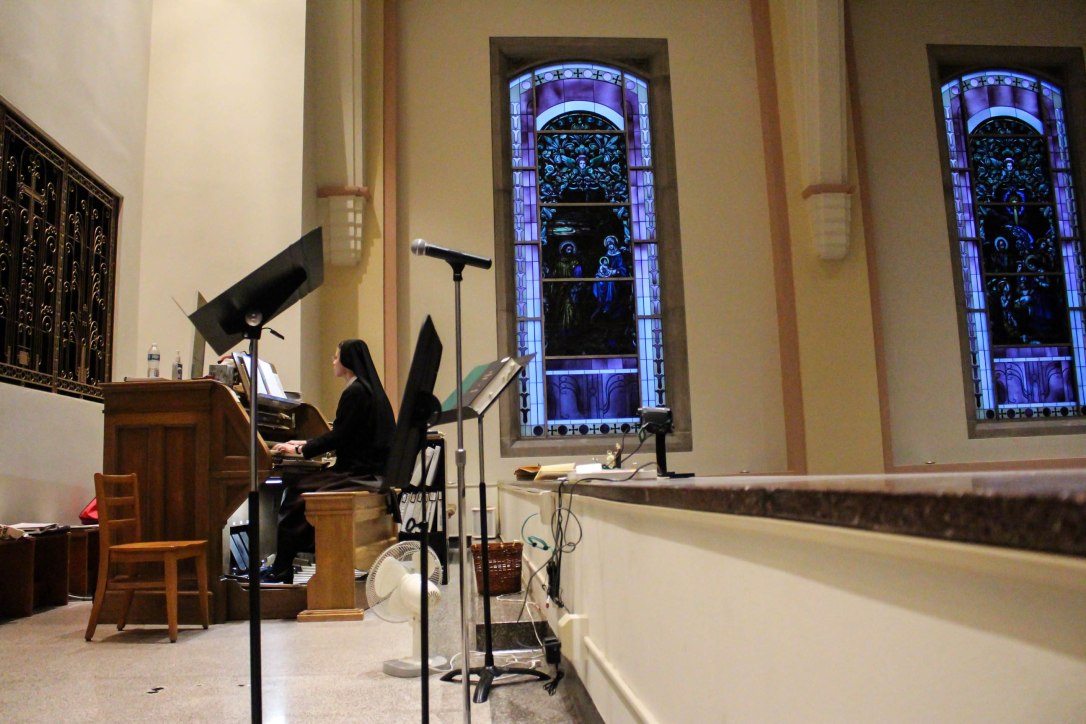 Sister Lisetta prepared for class in her office. Her office is a little room full of books, saint pictures, and crosses. We talked about many things such as the history of veils (how married women used to veil to keep their beauty for their husband, so sisters veil to reserve their beauty for Christ). We also talked about the process of entering the community. She described it as an intense and extensive process. Usually, women begin with a discernment retreat, which is where the community begins to get to know the woman. When a woman is discerning, she may come and stay with the sisters, pray with them, eat with them, and essentially see what it is like to live in their community. The formal step of showing desire to enter is to ask for papers (similar to an application). Once a woman enters, she is free to leave any time before making final vows, which is after 8 years.

Sister Lisetta taught a class to the novices later in the day. They begun the class with prayer; after the formal class, they worked on making short films of each novice and postulant talking about their discernment process. Then, they had choir practice with Sister Lois; the sisters are quite talented and it is obvious that they do their best with everything they do. The rest of the day included lunch, prayer, preparation for a retreat for kids, library duty which involved putting away all the books back in their proper place, and more prayer. I left right before dinner.

A few lessons I learned from my time with Sister Lisetta, a Franciscan nun in Mishawaka.

We are called to treat all with love and respect.

Religious sisters are some of the happiest people you’ll ever meet.

Sisters use their isolation from the world to grow closer to Christ.

This was a day full of joy. If you would like to learn more about the Sisters of St. Francis of Perpetual Adoration, follow the following link: http://ssfpa.org/

The full album from my day with Sister Lisetta can be found here!

If you or someone you know would allow a stranger (me) to follow you around for a day and take pictures of your life, contact me!!! I’m always looking for people that will help me expand this collection, which I’ve called Vocati a Christo.

1 thought on “A Day in the Life of Sister Lisetta”